I'm so intrigued and enchanted by the rituals of cultures older than mine.   The USA is such a young country in comparison to most of the world.  Here in this country we are, in some ways, lucky to have access to so much and yet that leads to taking so much for granted.

I was so very moved when I recently discovered the Festival of Broken Needles, held every February 8 in Japan.  I'm thinking that it was a good thing that I discovered this custom a few days after it was celebrated this year because I can now thoughtfully prepare for next year's ceremony. 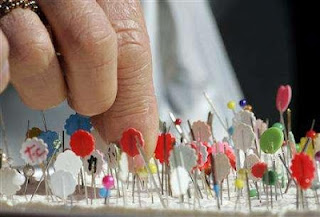 The Festival of Broken Needles, also known as Hari-Kuyo is an annual ceremony held at Shinto Shrines and Buddhist Temples for sewists, tailors and kimono makers.  Their worn and broken pins and needles, saved throughout the year, are laid to rest, thanked and honored for their faithful service.

I love that the value of small, inanimate objects is recognized and appreciated.  The concept that serviceable tools not be lost, wasted or carelessly replaced appeals to me.  In researching this post, I read about a woman's Grandmother who always had a needle woven into the fabric of her dress, ready to be called into service.  Every day.  And the Grandmother had only one needle.  Imagine her connection with that needle, and the care she had to take so that the needle wasn't lost.  That kind of connection is worthy of ceremony when it's days are done, don't you agree?

Another aspect of the Needle Mass is the recognition that women have 'secret sorrows' which are reflected upon during the many hours spent stitching and that those sorrows are passed on to the needle which helps to bear the burden.  To show such reverence for a seemingly simple tool is, in the act of this ceremony, a living prayer.  In fact, the women who participate in this requiem ceremony pray that their sewing skills will improve in the coming year.

To honor her own needles, Susan Elliott of PlaysWithNeedles designed this gorgeous needlebook and e-class.  The class has already begun and, sadly, it's too late to join in, but maybe Susan will offer another...I can hope, right? 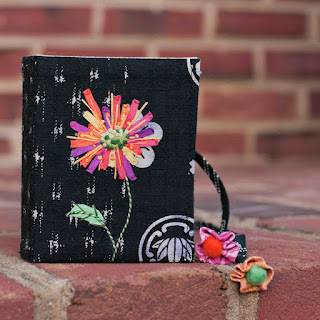 And I have to say that I'm quite thrilled that Susan chose FeltOnTheFly wool felt for her beautiful needlebook.  I had no clue when she ordered the wool felt that she was working on such a meaningful project.  If it hadn't been for Susan sending me a link to her blog post showing the needlebook, I may have never learned about Hari-Kuyo.  Thank you, Susan!  You can see Susan's personal needle ceremony right here. 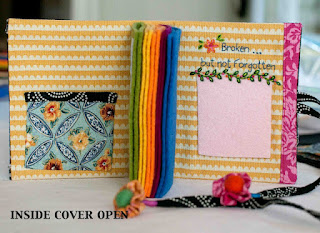 So now that I know about this 400-year-old Festival of Broken Needles, and since I have vowed to make more time for stitching this year, I will need to create something special; some soft place in which to rest my broken and bent needles and pins so that I may properly and thoughtfully say goodbye to them on February 8, 2013.  I don't plan to travel to Japan for the official ceremony, but I'll come up with something right here in the USA...

Beautiful in it's simplicity, I hope you'll take a few minutes to scroll through this booklet:

Posted by feltonthefly at 4:17 PM

What a wonderful tradition and that you so much for sharing it. I'm going to remember this forever and share it.

Your post today is my honor and pleasure especially because my both grandmothers were good at hand-sewing and held Needle Mass every year during their lifetime. As a Japanese, I would like to send my sincere gratitude for your sharing this custom and spirit! Thank you!!
Ayako

Dear Kim and Ayako - thank you so very much for your heartfelt comments. This amazing ritual touched me on a profound level. I'm so glad you both enjoyed my post.

Oh how wonderful, thank you so much for sharing this .. I hope that I too can join in next year ..... xxxx

Wonderful post Janet. And yes, I plan to re-run the class again so I'll let you know...and of course, I will be using your amazing felt...

Widgets for Etsy Sellers
Powered By

Places You Can Find Me: